The 40 for 40 countdown continues with #34, a near-masterpiece from a quirky director whose attention-to-detail and love of the bizarre is unlike any other.

A movie responsible for not one, but two career-changing performances that altered the way I (and Hollywood) looked at those actors forever. 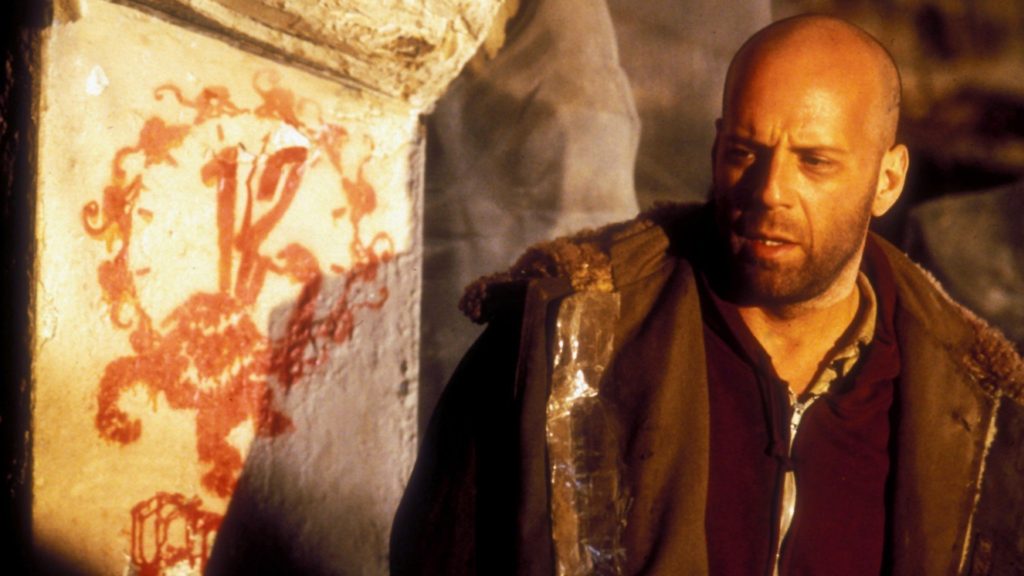 If I had to pinpoint one similar trait about all of Terry Gilliam’s films, quite simply, I’d have to say this…

Brazil, The Adventures of Baron Munchausen, The Fisher King, Fear and Loathing in Las Vegas.

All weird. All Gilliam’s. 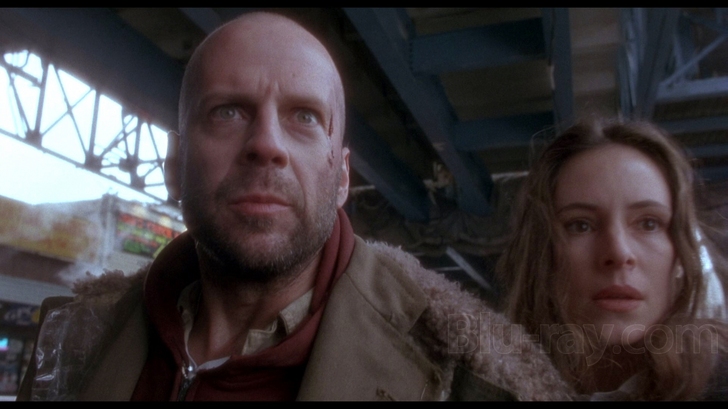 For those who don’t know, Gilliam was the one American in Monty Python’s Flying Circus, responsible for those odd little animated segments, most notable, the Monty Python foot.

When you look closely at those little cartoons, you can see they clearly come from a mind preoccupied with detail and warped with a dark sense of humour. 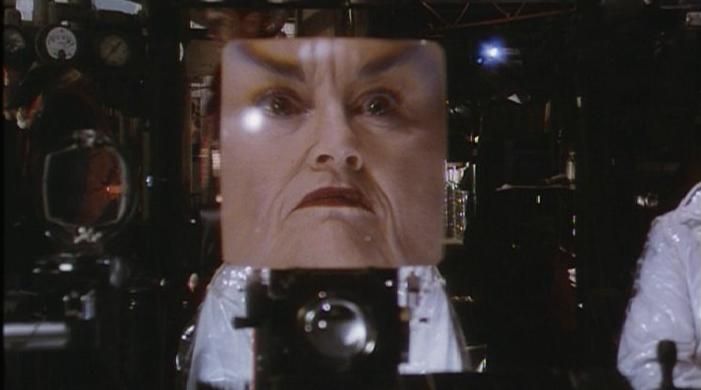 Gilliam’s films are no different.

Imaginative fantasies with themes of authoritarianism, out-of-control bureaucracy, characters with deep, psychological issues, and funny-yet-tragic story twists; all of these are staples of Gilliam’s work. 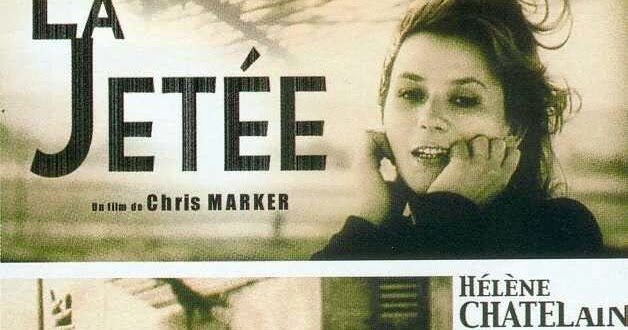 Essentially a remake of the French short film, La Jetée, on the surface (no pun intended), the film’s plot revolves around James Cole, a prison inmate from the future, tasked with going back in time to gather information about the origin of a deadly virus responsible for killing over five billion people, eradicating the human race and forcing the survivors to live underground like animals.

When you dive a little deeper into the movie, things begin to get complicated. A paradoxical scene of a young boy traumatically witnessing the shooting death of a man flickers throughout the movie, often at times of stress and confusion for Cole. A subtle-yet-constant reminder of his fragile mental state. 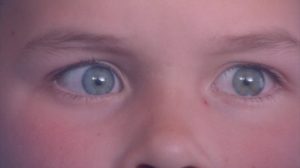 And that’s just the beginning of this mind-bending movie.

I mentioned in a previous 40 for 40 article (#36) that I believe Unbreakable to be Bruce Willis’ greatest all-round acting performance. I still believe that, but his role in 12 Monkeys is very, very close.

In 1995, Willis was still very much the ‘Die Hard’ guy. Yes, he had appeared sporadically in non-action / non-comedy movies like his turn as Butch in Pulp Fiction, but for the most part, Willis was known as the larger-than-life, Hollywood action hero.

Willis delivers an amazing performance as Cole, a troubled man with clear mental stability issues, struggling with not only the bizarre chain of events unfolding around him, but his own internal demons. Incredibly perceptive, intense-yet-vulnerable, Cole is a double-edged sword. His almost timid, compliant nature gives way at the first sign of danger or frustration, releasing torrents of rage and violence that is obviously the reason behind his incarceration when we first meet him.

But perhaps the most fascinating element to the Cole character comes later, when the film begins to make you wonder if he truly is insane. His flashes of recognition between past and future (most notably, the bear, and seeing an MRI machine as his own time-travel mechanism) make you question whether Cole is just seeing a distorted view of the world. The frequent voice that plagues him (who we first believe to be a neighbouring cellmate) is another possible symptom of his illness.

These ambiguous components build upon one another to sow the seeds of doubt in Cole (and by proxy, us as viewers) about his true ‘reality’. At one point, he even tries to rid himself of his ‘delusions’, choosing to ‘get well’ and see ‘the future’ and its ‘scientists’ as mere manifestations of his ailing mind.

Cole’s mindset (whatever it is) plays host to one of the film’s underlying themes; the very nature of ‘sanity’. Gilliam seems to be asking his viewers what society should do with the mentally ill. Should we lock them away (as Jeffrey Goines implies) to shield the ‘normal’ people from the very concept of madness? Or do we help them, treat and care for them as seen by Madeleine Stowe’s character, Dr. Kathryn Railly. 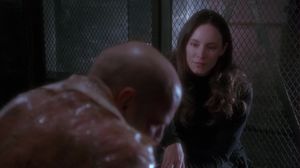 Like Willis, Stowe is also terrific in this movie. Her role is easily the film’s most difficult, playing a confident, intelligent psychiatrist, who after initially being sympathetic to what she believes is Cole’s illness, is then kidnapped and subjected to his madness, only to slowly and terrifyingly realise he might just be telling the truth.

At the same time, Stowe plays Kathryn as a woman on the verge of a mental breakdown. She herself starts to question her sanity the more she engages with Cole and his mission. It’s a nice little plot device that works in a movie where most of its characters are of indeterminable mental health.

Especially when Kathryn realises the bullet she removes from Cole’s leg seems to be from World War I. The very idea that Cole is a time-traveller, which also means billions of people are about to die, triggers something within Kathryn and drives her closer to Cole’s state of mind, just as he is trying to leave behind his delusions and emulate her once-rational demeanour.

Wills and Stowe might indeed be great in 12 Monkeys, but Brad Pitt steals the show. Before this film, I only knew Pitt as the Legends of the Fall guy; the latest Hollywood heartthrob all the girls at my high school would swoon over.

However, his performance as Jeffrey Goines made me realise, “Oh, he’s a real actor now…”

Jeffrey is simply, as Cole says, “A real nut.” The ticks and mannerisms, his constant flipping people off, as well as the fact Pitt allowed himself to be ‘de-glamorised’ for the part, were all wonderful choices by an actor who used this film to prove his talents stretched much farther than just his good looks.

Even the Academy seemed impressed with Pitt, nominating him for Best Supporting Actor for his movie, an award I’m sure he would have won had he not been up against Kevin Spacey in The Usual Suspects.

Terry Gilliam makes no small decisions in his films. Even minor character roles are usually filled by a notable and memorable actor (see Tom Waits in The Fisher King). So too in this movie, are the smaller roles meticulously cast.

Acting legend, Christopher Plummer plays Jeffrey’s well-to-do and put-upon father. Chameleon David Morse appears as Dr. Peters, the mysterious man truly behind the disease, and the Riddler himself, the late-great Frank Gorshin, turns up as the head of Kathryn’s psyche ward.

Interestingly, in a movie filled with mental patients, the kooky Gorshin isn’t one of them. Instead, Gilliam casts him against type, a figurative ‘madman running the asylum’ in what feels like a clever little in-joke from the former Python member.

The movie is filled with little gems like that, noticeable more and more upon repeat viewings. For example, I like that no one involved in the time-travel mission gives any credence to trying to alter the timeline or change history, resigned to their fate in a pre-destination version of time-travel, unlike lighter films like Back to the Future.

Another time-travel conundrum is the idea that Cole thinks he may have caused the spread of the virus in 1996 when he inadvertently gave the idea to Jeffrey in 1990. For time-travel movie junkies like myself, it’s a remarkable little idea, once that no doubt hurts the brains of those not fluent in the complexities of time-travel theories.

That’s why I love 12 Monkeys, though. It makes you think.

I mentioned at the beginning of this article that Gilliam’s eye for detail is second-to-none, and once again, in this movie, the set design is astounding. The underground prison, Cole’s makeshift hazmat-suit, the empty, apocalyptic streets of future Philadelphia, all thoroughly-detailed with Gilliam’s unique sense of Baroque style, and expertly shot with his trademark wide-angle lenses, deep focus and Dutch angles. 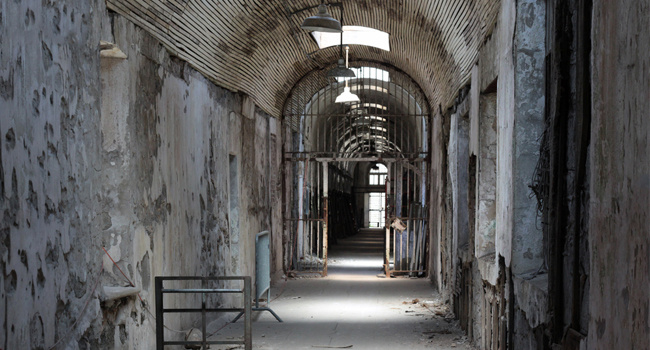 The greatest example of Gilliam’s eccentric style has to be the mental health ward, itself. A dilapidated shamble of a facility, with rusted doors and prison bars, peeling paint and dirty floors; it is as forgotten and condemned as the troubled people contained within. 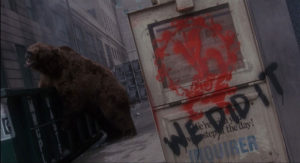 Lastly, Gilliam keeps his love of macabre twists alive and well in this movie. The reveal that Jeffrey and his Army of the 12 Monkeys are nothing more than over enthusiastic animal rights activists is a wonderful misdirect that makes you (wrongly) sigh with relief and think everything is going to be okay. 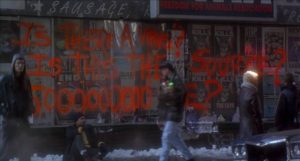 I feel the movie’s greatest twist lies with its climax. It’s a tragic conclusion, one with a stunning revelation, but also a somewhat triumphant one. Yes, it seems all is lost. But like most of the film, look closer, and you’ll realise that Cole is indeed successful in his mission. The past of 1996 may remain doomed, yet it seems in the future, the human race has just made its first step to reclaiming the planet.

The only questions left to answer are, should they? And if they do, do they deserve it?

And don’t forget to order an Unfunny Nerd Tangent shirt! No need to pull your teeth out, Bob. Mon Milfma will help you save the future!