What do you get when you cross the TARDIS with classic rock ‘n’ roll and not one, but two California slackers? 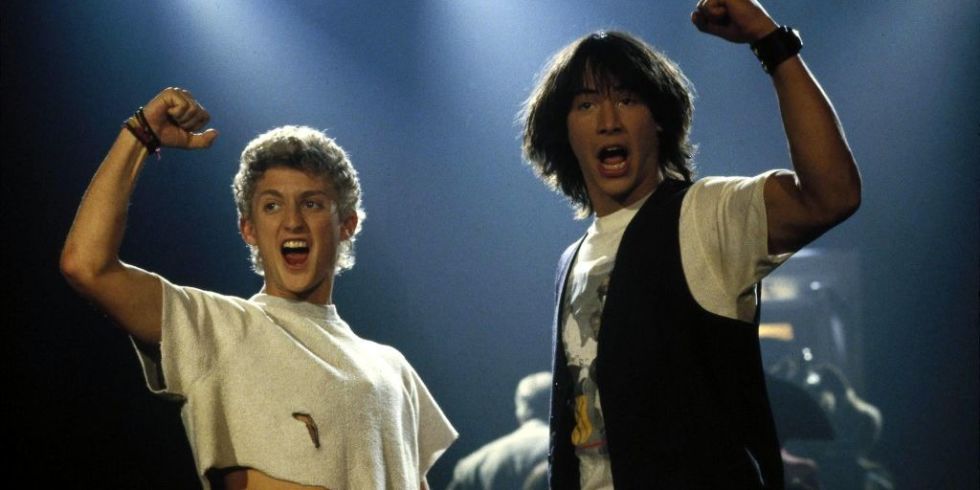 This is one of those movies that everyone seems to love. Like many feel-good eighties comedies, there aren’t too many people that have anything negative (or non-non-heinous) to say about it.

And I’m no different. This movie is pure fun.

Nobody encapsulates the eighties stoner / surfer-dude stereotype better than Bill S. Preston, Esq. and Ted ‘Theodore’ Logan. Not Jeff Spicolli, not Michaelangelo, nobody. Although, from all accounts, they’re not stoners and we never see them surf.

No, our beloved, dim-witted pals are totally devoted to their ‘band’, Wyld Stallyns, convinced they’ll soon be massively-bodacious music sensations, despite not actually being able to play.

Alex Winter and Keanu Reeves are at their charming, lovable best in this movie. Their on-screen bromance and its authentic chemistry carries the film, even more than the ‘absurd’ plot and the outrageous supporting characters they soon encounter.

Winter and Reeves excel in their roles. Neither outshines the other. They equally share screen-time, one-liners and even parental subplot issues; Ted’s fear of his domineering father and Bill with his oedipal complex towards stepmother, Missy.

However, as they say, together they make: Wyld Stallyns, and while in the beginning there is literally no actual band, instead it symbolises their steadfast friendship and loyal camaraderie that keeps them together as a force to be reckoned with when the future comes (literally) calling.

The now-iconic air-guitar sound effects that pop up when the guys celebrate even the smallest of ‘victories’ still make me smile, no matter how many times I see them. They punctuate the film like amusing little splashes of fun, and are almost a character of their own.

Bill and Ted’s use of not only the ‘typical’ surfer-speak-slang, but also an impressive vocabulary of words most younger viewers would have to look up to fully understand, as well as their feel-good attitudes and the honest, heartfelt nature of their characters, is why their place in the pop-culture lexicon has endured after nearly thirty years.

Although they (kind of) follow in the footsteps of Cheech and Chong, without Bill and Ted, do we get Wayne and Garth or Jay and Silent Bob?

Anyway, luckily for our heroes, a visit from time-travelling Rufus, played by comedy legend, George Carlin (who refrains from using his Seven Words You Can’t Say on Television), inspires the would-be rock-gods to embark on a most excellent adventure through time. Should they fall short, by failing history, they’ll doom their futures, and Ted will be shipped off to an Alaskan military school faster than the boys can say ‘Eddie Van Halen’.

The late George Carlin was a cool guy. The coolest cat in the room, even. His stand-up comedy routines are now the stuff of legend, having inspired a host of future (no pun intended) comedians and anarchists, alike.

As Rufus, he remains as calm and collected as ever, sent from the future of 2688 where despite having the most excellent water slides, everything his society is built upon will soon come crumbling down if he doesn’t interject himself in Bill and Ted’s lives and ensure the future turns out most triumphant.

Time-travel can be a tricky narrative to master, especially in comedies. But this movie handles its sci-fi concept as well as any other. On closer inspection, just like the two main characters, the script is actually a lot smarter than you’d first think. The opening scenes are filled with cool little moments that foreshadow what’s to come.

Look closely at the blackboard in the classroom scene. The names of almost all of the film’s historical figures are written in chalk, and Bill is specifically quizzed by Mr. Ryan about Napoleon, aka that ‘short, dead dude’.

Bill & Ted’s Excellent Adventure also has some clever little pre-destination incidents written into its story, another highlight for time-travel movie enthusiasts like myself. The grandfather paradox with Ted’s father’s keys and the tape recording inside the police station, as well as one of the funniest scenes in the movie, when Bill and Ted meet Bill and Ted.

Even the means of time-travel in this movie is a nice little nod to Dr. Who, and funnily enough, an eerie precursor to the way Neo travels between worlds in what would eventually become Keanu Reeves’ most famous role in The Matrix.

The movie’s special effects hold up surprisingly well considering the year it was made and more importantly, its budget. Although, the greatest part of this movie (besides Bill and Ted, themselves) has to be the historical figures.

Escaping a barroom brawl and medieval England with Billy the Kid, quoting Kansas lyrics to Socrates and going on to recruit Ludwig Van Beethoven, Abraham Lincoln, Genghis Khan, Sigmund Freud and ‘Noah’s wife’ Joan of Arc adds both comedy and a surprising amount of heart to the story, as we see that just like us, the legends of the past become quickly enamoured with Bill and Ted. Their chaotic montage in the San Dimas mall is as fun a sequence as any other eighties comedy has to offer, with Genghis Khan’s sporting goods rampage my favourite.

However, Napoleon steals the show. Watching one of history’s most notoriously-strategic minds forced to adapt to the Californian lifestyle delivers funny moment after funny moment, none better than his defeat at the hands of ten-pin bowling.

Bill and Ted’s most outstanding moment is saved for the finale, when they reveal their time-travelling friends during their history report. President Lincoln, himself delivers the mantra which Bill and Ted will pass onto future generations, a message most of the world yearns for in today’s political climate.

While not exactly the same as those seen in Rocky or The Karate Kid, Bill and Ted’s victory still ranks highly with me as a genuine, feel-good eighties movie moment.

What’s next for Bill and Ted? After the sequel, Bill & Ted’s Bogus Journey was released and embraced by fans as much as the original, it seemed likely we’d get a third outing. Unfortunately, we never did, and even after decades of rumours and rumblings, it seems we may never again see Wyld Stallyns. If not, be content that we did get two amazing films, especially this one, which holds a special place in my heart, as it does with millions of others just like me.

Now, excuse me… I have a date with Iron Maiden…

Rating: 4 out of 5 oedipal complexes.

Don’t forget to wind your watch, and also don’t forget to order a most-triumphant Unfunny Nerd Tangent shirt! Mon Milfma is nothing short of an ‘historical babe’!