A boy and his grandfather.

A villain who lives. A six-fingered man. One of the most memorable lines in cinematic history. And a giant.

#28 is a storybook story about true love as real as the feelings you feel.

And if this movie doesn’t make you feel anything, you might be dead inside. 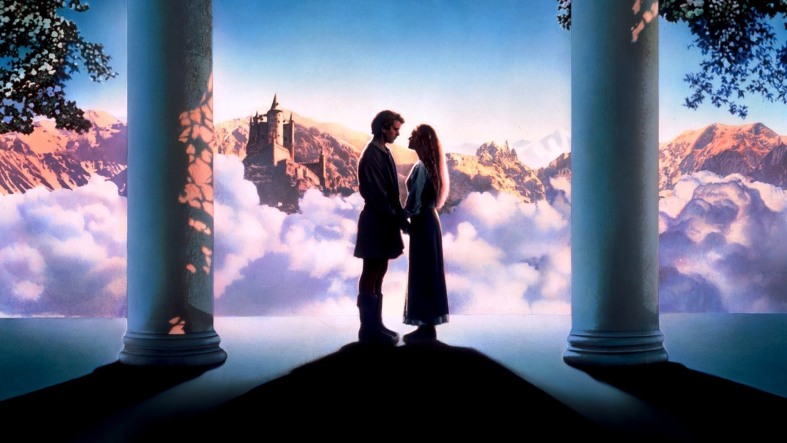 I don’t think I’m wrong in saying most people consider The Princess Bride a classic. A love story, an adventure, a comedy, a family film, it’s all of those and more.

Part of the movie’s charm undoubtedly lies with its humour. Many scenes have that ‘tongue-in-cheek’ element, and while it never quite reaches the level of out-and-out spoof, the film clearly doesn’t take itself too seriously with several sly little winks to its audience.

Based on the book by William Goldman, The Princess Bride employs a unique storytelling device in the sense that we are watching and listening to a tale being told by a grandfather (Peter Falk) to his grandson (Fred Savage). From the beginning, the movie is not only framed by these scenes, but every now and then, the ‘real life’ elements interrupt the fairytale to deliver a secondary plotline which I’ll elaborate on in a moment.

These scenes help set expectations right away by straight up telling the audience that this is indeed a clichéd fairytale, so just sit back and enjoy. Any far-fetched or seemingly ridiculous elements are diffused immediately, since the grandson addresses them up front.

I love these scenes for two reasons. Firstly, the character growth of the grandson.

Initially, he wants his grandfather to ‘skip the kissing parts’, yet by the end of the story, he is comfortable with the idea of romance and understands how special true love can be. The once-petulant child grows up during the course of the movie, and we see the emergence of what will be a wonderful relationship between him and his loving grandfather.

Savour your grandparents, kids. They won’t be around forever.

Secondly, the most important ingredient of these ‘real life’ scenes is what I believe is the overall message director, Rob Reiner has for young viewers. By having the grandson primarily reject the story for being a ‘kissing book’, the movie gets a little Meta with its subject matter. As the grandson becomes more open-minded and accepting of new story ideas, Reiner seems to be telling boys watching his movie, ‘See, it’s okay to like other things. Not everything has to be explosions and death.’

In 1987, when the general rule of thumb was, ‘He-Man is for boys, Barbie is for girls’, having a movie straight up telling boys it’s okay to like fairytales and romance was quite unusual.

Speaking of romance, Robin Wright as Buttercup is the quintessential storybook princess. Beautiful, elegant, yet like all classic fairytale heroines, touched with an air of sadness. Her chemistry in the early scenes with Westley the farm boy (Cary Elwes) sets the stage for their love with a slew of longing looks and smouldering stares.

Since it’s the foundation on which the whole film is built, the love between Westley and Buttercup needs to be one hundred percent believable, and thanks to their performances, both Wright and Elwes deliver exactly that. And then some.

Wright and Elwes are greatly assisted by Mark Knopfler’s poignant score and Willy DeVille’s Storybook Love, both of which place you in exactly the right frame of mind for what’s to come. Together, both the music and that beautiful song are almost characters of their own.

Cary Elwes is pretty much perfect in this film. Errol Flynn, Clark Gable and Douglas Fairbanks all rolled into one. His tales of the Dread Pirate Roberts hang over the entire film, a legend in keeping with The Phantom or Black Panther, and his scenes as the Man in Black, where he systematically defeats all three outlaws, one-by-one, shows a character whose preparation skills rival Batman’s.

Subduing the misunderstood monster, Fezzik (Andre the Giant) and outwitting the self-proclaimed genius, Vizzini (Wallace Shawn) are both engaging feats, but the highlight of the entire movie is the duel with everyone’s favourite, Inigo Montoya (Mandy Patinkin).

I’m happy to claim the sword fight in this movie as the greatest ever put to film. The amazing choreography, expertly performed by two charismatic actors channelling the spirit of Hollywood’s ‘Golden Age‘ is simply wonderful.

All the while, both characters and their banter add an extra level of heart to a scene that in today’s world, might end up an overblown, CGI mess. The running joke of ‘I’m not left-handed / I’m not left-handed, either’, is perhaps one of my all-time favourites in any film.

While the duel between Inigo and Westley is the entertaining peak of the movie, the final battle between Inigo and the villainous Count Rugen is perhaps the film’s emotional one. Patinkin pours so much soul into the character, that when it appears as though Inigo is going to lose, we aren’t as upset at his potential death as much as we are devastated that he might fail his oath to his father.

Likewise, we’re dumbfounded when Westley is killed midway through the story. Yes, killed. As the grandfather points out to his distressed grandson, Westley is dead. But that doesn’t mean the story is over.

Heroes are only as good as their villains allow them to be, and the bad guys of The Princess Bride are nothing if not distinctive. Stereotypical at first glance, when you look a little closer, you’ll realise they’re anything but.

Rob Reiner recruits his fellow This Is Spinal Tap alumni, Christopher Guest to star as Count Rugen, the six-fingered man, which, in a nod to Nigel Tufnel, makes Rugen a man whose fingers ‘go to eleven’.

Perpetual portrayer of slime-ball characters, Chris Sarandon is perfect as Humperdinck, the slippery, would-be-monarch and wannabe tyrant. His undoing at Westley’s threat of ‘to the pain’ allows Sarandon to portray Humperdinck as the snivelling coward he truly is.

The genuine friendship (and perhaps, implied bromance) between the two adds depth to the villains, who in most other movies, would simply be moustache-twirling cartoons.

Rugen’s machine is also an ingenious and sinister device in an otherwise family film. Guest really sells the danger of the contraption with his panicked reaction to Humperdinck pushing it to 50, letting us instantly know that Westley is doomed.

This film is full of memorable cameos.

The albino character (Mel Smith), whose stereotypical hoarse voice is cleared with a cough to reveal a hilariously-out-of-place accent…

The Boo Lady, who has literally spawned a million internet memes…

And the clergyman (Peter Cook) with his speech impediment…

But there is no greater cameo than the Miracle Max scene, in which the legendary comedic talents of Carol Kane and Billy Crystal are on full display. Mostly ad-libbed, this scene is perhaps Crystal at his all-time best, while Carol Kane delivers yet again after her always-amusing appearances in The World’s Greatest Lover, Scrooged and the television sitcom, Taxi.

Crystal, through Miracle Max, introduces us to the concept of ‘mostly dead’, an imaginative take on the over-used ‘returned to life’ archetype of many fantasy-based stories.

Thanks to Max’s intervention, our heroes are eventually victorious, and when Inigo says, “I want my father back, you son-of-a-bitch…” it still conjures up goosebumps as we share in his triumph.

Inigo’s partnership with Fezzik is another well-remembered piece of the film, thanks in part to Andre the Giant and his surprisingly-subtle performance. Knowing what we know now about the legendary big man of professional wrestling, his own tragic life somewhat spills onto the screen and gives the misjudged Fezzik a new layer of character.

This movie has left its mark on Hollywood, if for nothing else, its array of instantly-quotable lines:

And of course, the line that everyone knows…

“My name is Inigo Montoya. You killed my father. Prepare to die.”

This film has also influenced countless others with not only its style, but it characters as well. I often wonder where Game of Thrones favourites, Arya and the Red Viper would be if not for Inigo Montoya.

As the grandfather says, The Princess Bride truly has something for everyone. ‘Fencing, fighting, torture, revenge, giants, monsters, chases, escapes, true love, miracles,’ … all combined with wonderful performances, a terrific story filled with humour and suspense, capped off by those three little words…

No, not those ones…

No, not those, either. The other three little words.

Rating: 4 out of 5 rodents of unusual size.

If you’re interested in more talk about The Princess Bride, check out Episode 16 of our show.

And while you’re at it, grab an Unfunny Nerd Tangent shirt! Even if you’re ‘mostly dead’, Mon Milfma will make you feel those feelings you feel!