Instantly quotable, forever funny and quirky to boot, #29 began life as a cult classic but has grown to rise above that stigma with its array of bizarre characters, scenarios and plot points, almost as odd as the directors, themselves.

And if you don’t agree, well… that’s just, like… you’re opinion, man! 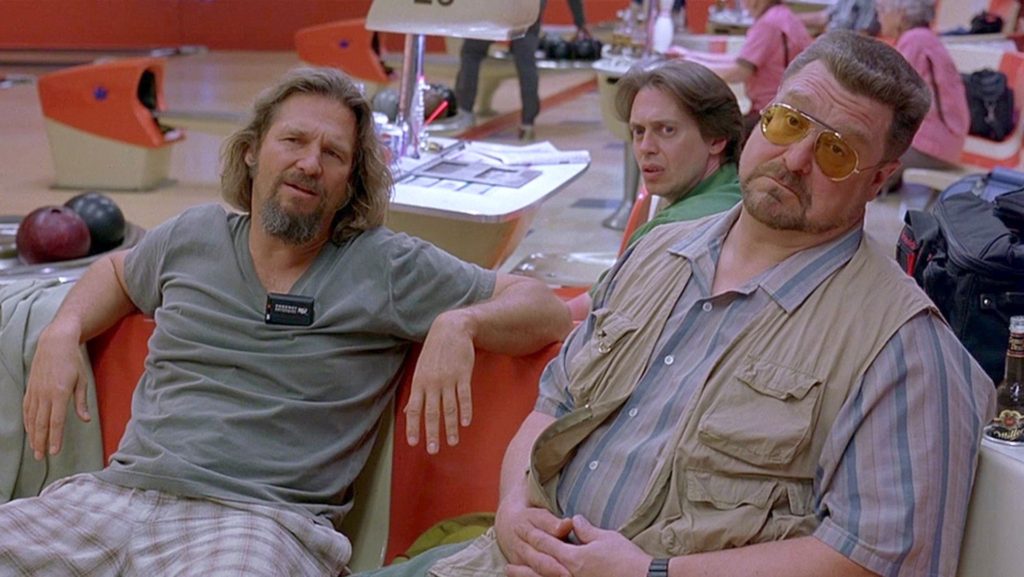 Every now and then, a film comes along that encapsulates the decade in which it debuted. In my opinion, the nineties are defined by The Big Lebowski.

A time-period caught between the decadent 80s and the techno-fear of the early 2000s, the 90s (more than any other decade) heralded the rise of the independent film era. Television at the time was ruled by shows like Seinfeld and Friends, predominantly about people sitting around talking to each other, and the movies followed suit.

Starting with Richard Linklater’s Slacker and its follow up, Dazed & Confused, films like Kevin Smith’s Clerks, Doug Liman’s Swingers and Quentin Tarantino’s Reservoir Dogs, captured the imaginations of many filmgoers. These low-budget, character-driven stories with fresh-and-interesting dialogue soon became immensely popular, and were accepted as a staple of Gen-X culture as much as MTV, grunge and hip-hop.

By 1998, the Coen Brothers, Ethan and Joel, had already begun to carve out a place in Hollywood with films like Raising Arizona, Miller’s Crossing and Fargo; all quirky, fun movies that straddled the lines between drama, black humour and satirical parody.

With The Big Lebowski, the Coens opened the flood gates of their genre-bending style, opting for a lighter, more consistent comedic tone. It worked, and the film (while not an instant hit) was soon cherished by its fans. For quite a while, it was also the go-to iconic film for slackers everywhere, embraced in a similar fashion as Scarface was by rappers, or Goodfellas by stand-up comedians. It became the movie that ‘made you cool’ to have a poster on the wall in your college dorm.

As anyone not living under a rock for the past twenty years can probably tell you, The Big Lebowski centres around one Jeffrey Lebowski (Jeff Bridges) aka ‘the Dude’, an unemployed Los Angeles slacker, bowler and White Russian aficionado, based in part on Jeff Dowd, a film producer and political activist the Coens met while trying to find buyers for their first feature film, Blood Simple.

In The Big Lebowski, the Dude’s troubles begin when his apartment is raided by a pair of thugs, who assault him and urinate on his favourite rug. This wrong guy / wrong time / wrong place scenario kicks off the story in the most amusing of ways, leading the Dude to meet his namesake, the ‘real’ Jeffrey or titular ‘Big’ Lebowski, played by veteran actor, David Huddleston.

Huddleston plays his Lebowski as a trumped-up braggart, a loudmouth magnate trying to prove he’s richer than he actually is. The Coens employ their usual sense of irony with the character, when we learn that he is in fact behind the entire plot, initially berating the Dude for wanting a ‘handout’, yet he, himself is seeking to collect money he has not earned.

Maybe he should have just run for president.

Anyway, back to the Dude.

In many ways, he’s a conundrum. He seems to live his life by the mantra ‘take it easy’, yet abhors The Eagles. He is often lauded as an icon of laid-back originality, yet the Dude gets worked up a lot by events unfolding around him, and almost all of his witticisms are parroted from things he sees on TV or from other characters he meets, including his line about, ‘this aggression will not stand, man…’ taken from viewing President George H. W. Bush on television while comically writing a cheque for his 69c milk.

Eagle-eyed viewers will notice the eeriness of that particular scene. While the movie was released in 1998, it is set in 1991, and as the Dude fills out his aforementioned cheque, he dates it, September 11…

I can’t stress this enough, but Jeff Bridges is incredible in this movie. The film is worth watching for his appearance alone, and while no one really knows where the Dude ends and Bridges begins, that’s the charm of the character. His attitude towards others and life in general make him an endearing protagonist, even if his story is littered with oddball situations and weird associates.

The first of these outrageous compatriots is the Dude’s friend and bowling partner, the irrepressible Walter, played by John Goodman.

John Goodman is terribly underrated as an actor. His versatility has shown throughout his career. Fallen, 10 Cloverfield Lane, Sea of Love and of course, his role as Dan Connor on the Roseanne show, all of these eclectic roles have highlighted Goodman’s talent over the years, but Walter Sobchak might be his greatest role ever. At least for me.

His instant rage at the slightest affront, such as pulling a gun in the bowling alley over a foot-fault, his indignation at learning of the Dude’s misfortune and his post-war veteran complex, makes Walter an insufferable-yet-somehow-loveable character.

Walter and his conversion to Judaism for his (now ex) wife and the devotion to his adopted religion remains one of the movie’s more hysterical parts, as well as the duty of care he shows his ex-wife’s dog. And pulling the Big Lebowski out of his chair to prove that he walks (spoiler, he doesn’t) is another ‘oh no’ moment you dread happening the second it begins.

But perhaps Walter’s best (or worst) moment is tracking down Larry, the high school kid who stole the Dude’s car, and the barrage of abuse that follows.

Even funnier, is the television edit of this scene, in which (a dubbed) Walter warns Larry about the dangers of ‘Finding a Stranger in the Alps’. It’s a quintessential scene for Walter, John Goodman and the Coen Brothers, now etched into the annals of comedy history.

Walter is partnered in this film by Steve Buscemi’s Donny, the quiet, unassuming contrast to Walter’s obnoxious demeanour. With a lesser actor at the helm, the role of Donny may have been destined to disappear into the background, but Buscemi’s understated and almost child-like performance made the character as memorable as Walter or even the Dude, himself.

I agree with the Stranger (who’ll we’ll discuss in a moment) that it is always a shame to see Donny pass away at the end of the movie – the only lasting downer in an otherwise entirely-fun film. However, Donny’s demise does lead us to two of the movie’s greatest comedic moments, firstly the debate about a ‘moderately-priced receptacle’ and the hilarious moment where Walter scatters his friend’s ashes… into the Dude’s face.

Donny’s death is also frighteningly foreshadowed when he misses his strike in the last bowl we ever see from him. Every other attempt in the movie results in a strike from Donny, accept his final one, signalling his upcoming doom in the parking lot battle with the nihilists.

Other interesting characters come and go in the film when needed, including Julianne Moore as the Big Lebowski’s daughter, Maude (possibly the only true voice of reason in the entire movie) and everyone’s favourite purple-clad king of the lanes, the Jesus.

Like Bridges, John Turturro excels in this role, although unlike the Dude, Jesus has limited opportunities to cement his legacy. To still be associated with a character with less than five minutes of screentime, proves how incredible Turturro is in this movie. In a film with many ‘villains’ he is possibly the Dude’s greatest nemesis, since his undeniable bowling prowess rocks Dude, Walter and Donny to their cores, while his Gipsy K­ings cover-theme of Hotel California might be a subtle, unspoken insight into why the Dude hates The Eagles so much.

If not for the (albeit played-for-laughs) sex-offender aspect to his back-story, the Jesus might very well have had his own high-profile film by now, and not just the upcoming semi-spin-off, Going Places.

The plot of The Big Lebowski  can be seen as overly-complicated, yet in many ways, that’s the point. Based on the detective fiction of Raymond Chandler, the Coen Brothers include many film noir elements in their story, including the Dude becoming a defacto-private-eye by necessity rather than design, which leads him to the Jackie Treehorn scenes and in turn, the most amazing drugged / dream sequence ever put to film.

The Coens’ script also employs the narrative device of the traveller, or in this case the Stranger, telling the viewers the story from his point of view. Like Turturro, the legendary Sam Elliot makes his presence felt in The Big Lebowski with minimal scenes, and let’s face it; the man is the out-and-out GOAT when it comes to the moustache game.

But there’s much more to this Stranger than meets the eye. At least I think so, anyway.

Let’s put it on Front Street: is he God?

He sidles in, only interacts with the Dude (does anyone else see him?) yet he knows a lot about everything else that’s going on as though he has some kind of omnipotent knowledge.

He narrates the story, bookending it. He doesn’t like cussing and drinks sarsaparilla, which if you think about it, seems like a drink God would order. Also, his line about a ‘little Lebowski’ – does that allude to some kind of saviour?

Think about it. Am I wrong?

Before we leave behind the array of characters in this movie, I’d be amiss if I didn’t at least mention the late Phillip Seymour Hoffman as the sycophantic Brandt, an overlooked role in his stellar-yet-tragic career, and Tara Reid as Bunny, the trophy wife of the Big Lebowski, whose disappearance sparks the oddball plot.

It’s a small-but-effective appearance from Reid, who quite possibly makes the best argument for more readily-accessible cash machines ever.

Back in 1998, this movie was recommended to me by my local video store guy, who in all the years he was operational, never once steered me wrong. I miss those days of walking into a video store and perusing the walls for new releases, many of which I’d never even heard of until they appeared on the shelves.

But what I can never miss… is this movie. Anytime I accidentally stumble across it on cable, I inevitably find myself watching until the very end, no matter what point the movie is at or how many dozen times I must have already seen it by now.

Part of this is due to the fact that this is a film in which you pick up something new each time you view it. The movie often says one thing while showing another, including…

In closing, The Big Lebowski was always going to make this list, it was just a matter of where. After twenty years, it has become too popular and too well-known to remain tagged as a ‘cult film’, yet its idiosyncratic style keeps it from being boxed in with the rest of its Hollywood cousins.

And that’s fine with me, man…

So, if you’ve already seen it, watch it again. If you haven’t, find it, watch and enjoy.

Then watch it again. And again.

And then with friends. And family.

Watch it at home, watch it at work, on your TV or your phone.

Rating: 4 out of 5 severed pinky toes.

For more thoughts on this movie, go back and relive Episode #47 of our show.

Make sure you grab an Unfunny Nerd Tangent shirt! If you don’t think Mon Milfma is the greatest, then… that’s just like… your opinion, man!