A ground-breaking movie in more ways than one, #14 stands the test of time as a bona fide film spectacle.

Part adventure, part horror, part sci-fi, it’s a movie that has everything and also, something for everyone.

So, hold onto your butts… 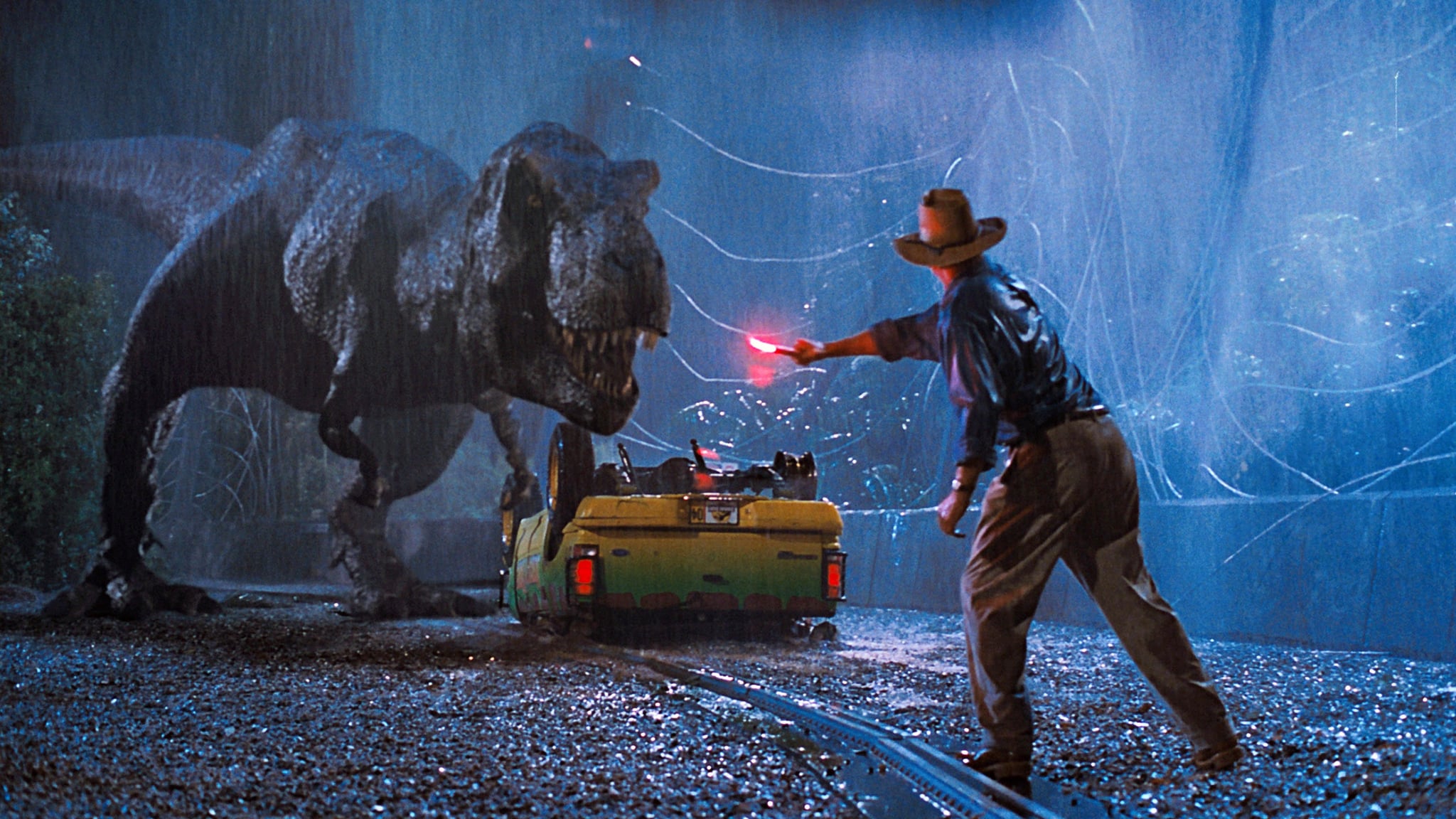 When I was a little kid, two things interested me more than anything else.

Almost everything about my first ten years on this planet was focused in some way or another, on or around those two topics. My love of movies, comic books and even pop-culture in general, can pretty much be linked back to one of those two subjects, no matter how miniscule the connection.

At this stage of his career, director, Steven Spielberg was already a juggernaut in the entertainment industry. With Jaws, Close Encounters of the Third Kind, E.T. the Extra Terrestrial and an entire Indiana Jones Trilogy on his resume, movie audiences were acutely aware of the man’s talent. And keep in mind, 1993 also saw the release of Spielberg’s Schindler’s List, another brilliant film and proof of his versatility.

When I first heard rumblings of (and later saw trailers for) a dinosaur movie by the guy who’d already filled my childhood with adventure and excitement (and admittedly, caused my thalassophobia), I couldn’t wait. Spielberg had already covered the realm of outer space several times, now it was time to see what he could do with my beloved thunder lizards.

Add the fact that these dinosaurs were being brought to the big screen with new-and-exciting, never-before-seen visual effects, and you’d better believe I was more than excited.

I still remember sitting down in the cinema for the first time, hoping that the movie would live up to the hype. Thankfully, it not only met my lofty expectations, but wholly exceeded them, reminding me why I had become so drawn to the extinct dinosaurs of yesteryear in the first place.

And that’s because Jurassic Park is everything an adventure film should be. It has an intriguing plot to capture the imagination of viewers of all ages, a great cast, terrific set pieces and, at the end of the day… a message.

But, let’s not bury the lead. The main reason this movie is what it is, is because of the groundbreaking dinosaur effects. With a mix of amazing animatronic ‘puppets’, designed by pioneer, Stan Winston, and (at the time) a new computer-generated array of prehistoric creatures by Industrial Light & Magic, Jurassic Park instantly became a seminal Hollywood blockbuster.

For me personally, no scene encapsulates the all-round greatness of this film more than the first appearance of the Tyrannosaurus Rex. That scene is simply outstanding. The build up with the iconic shot of the water rippling in the glasses, the tension of waiting helplessly in powerless cars as nothing short of an ancient, resurrected monster prowls the area and threatens our heroes.

From beginning to end, that scene is utterly enthralling. The perfect blend of CGI and practical effects make you believe the T-Rex is real, and might just jump through the screen to take a bite at us. Plus, watching slime-ball lawyer, Gennero (Martin Ferrero) get chomped by the rampaging beast is one of the most satisfying and karmic comeuppances in movie history, drawing both screams and cheers from audiences at the same time.

Not to mention, that if nothing else, the initial T-Rex appearance causes the injury to everyone’s favourite chaotician, Dr. Ian Malcolm, which leads to what might be the second-most famous scene of the film… sexy Jeff Goldblum.

In all seriousness though, Goldblum adds a much needed levity to the film, which threatens to get a little too serious at times. Malcolm’s unique take on several scientific fields and his terribly-lecherous nature gives Goldblum the perfect material to work with, crafting a character that audiences are still begging to see more of.

In addition to Goldblum, the remainder of the stellar cast add to a story that, in the hands of a weaker director or portrayed by lesser actors, could very easily have dipped into B-Movie schlock-horror territory.

Sam Neil as Dr. Alan Grant and Laura Dern as Dr. Ellie Sattler act as avatars for the audience. They share our reactions as they go from enthusiastic paleontologists (or paleobotanist in Ellie’s case) to eager, wide-eyed children, stricken with disbelief at seeing real-life dinosaurs.

We watch as Ellie is forced to stand up and be counted in a man’s world, not only in her chosen academic field but also in the high-stress environment of a malfunctioning park and the life-or-death situation it creates.

Supporting characters, Mr. Arnold (Samuel L. Jackson) and Muldoon (Bob Peck) give us new takes on the classic archetypes of bitter, tech-support-analyst and grizzled, jungle hunger. Despite the almost-clichéd nature of their roles, both Jackson and Peck excel, regardless.

All in all, we identify with the movie’s various characters. We understand their curious-yet-concerned nature. We love to hate the villains like the self-serving Nedry (Wayne Knight) and empathise with those who become reluctant, would-be action heroes when things bad.

And boy, do they go bad.

This is another area where Jurassic Park shines. It’s not only a wonderful adventure film, but it holds up as a horror movie, too.

Everyone knows the plot; thanks to John Hammond (Richard Attenborough), his company, InGen, and the infamous fossilised-in-amber mosquito, dinosaurs have been resurrected through the wonders of DNA-cloning technology to become the feature attraction of a (pending approval) amusement park.

But of course, as Dr. Malcolm says in the film, “Your scientists were so preoccupied with whether or not they could, they never stopped to think if they should…”

Spielberg does another masterful job of making sure these words come back to haunt Hammond in the goriest of ways, as his creations literally turn on their masters and run amok, ensuing that any humans now trapped on the island have themselves become an endangered species.

Science fiction is usually at its best when allegorical in nature; some kind of cautionary tale. Jurassic Park is exactly that. Based on the novel by Michael Crichton, the film carries on the literary themes of his book, essentially asking – What would happen if man were to take his scientific abilities too far?

The answer soon becomes obvious. Right from the opening scene, we can tell that the creators of Hammond’s park have bitten off more than they can chew (so to speak), as an unseen Raptor attacks and devours a hapless worker.

Instantly, the film forces parents to ask themselves whether or not their young child can handle what’s to come, and if not, here’s the chance to bail out. Spielberg offers a taste of what’s on its way from the get-go, and makes no apologies for the non-kid-friendly carnage we see later.

The aforementioned chomp of the lawyer, Nedry’s drawn out, tension-filled demise, the fearful scene in which the Raptors stalk the children in an empty industrial kitchen, these moments bring back memories of Spielberg’s roots with (again) Jaws, but also proves why he’s considered one the world’s greatest ever directors.

Between the thrill-a-minute dinosaur interactions, the uplifting score from maestro, John Williams, the charm of the cast and the ability to switch from thought-provoking sci-fi to awe-inspiring adventure to nail-biting terror (and back again), Jurassic Park has been one of my all-time favourites ever since I first set eyes on that computer-generated Brachiosaurus.

Its legacy is now paramount. Besides the obvious knock-offs this film paved the way for Hollywood visual effects. It spawned sequels of its own, as well as a horde of video games, toys and more. In fact, the real-life Jurassic Park franchise has become everything the fictional John Hammond wanted, even reaching a whole new generation of young, wide-eyed movie goers with the new incarnation, Jurassic World.

Yes, Fallen Kingdom may have disappointed many, myself included, but I have faith that the Jurassic Park films can still rise from the fossilised amber to reach greatness once more.

Because after all, life … uh, finds a way…

Rating: 5 out of 5 fossilised mosquitoes.

Check out more about the World of Jurassic Park with Episode 51 of our podcast – with special guest, Stacy a.k.a. @LittleSherbie.