You knew it was coming. And we’re finally here.

Despite its humble box-office beginnings, #7 is one of the most well-loved films of all time. A story of brotherhood in the face of despair.

Probably the greatest of its genre, written by a literary legend, it also brought us two of the greatest performances in Hollywood history.

And taught a generation to hope… 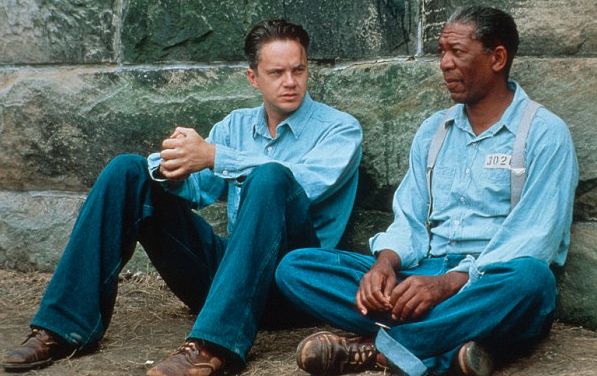 The Shawshank Redemption is one of those films you don’t often hear a bad word about.

It is perhaps one of the most universally-praised movies of all time, evident by not only how many years it has remained atop the IMDb Top 250 list, but also the amount of times it seems to appear on television.

In this day and age of streaming and ever-decreasing attention-spans, the fact that so many cable companies continue to broadcast Shawshank as often as they do (all over the world, no less), is testament to not only its quality, but also its continued appeal among audiences.

Yes, the world loves this movie. And so do I.

Director Frank Darabont does such a masterful job with this film (based on the Stephen King short story), that it’s mind-boggling to think this was his first major feature. His control over the film shines through in every aspect, a skill he repeated a few years later with The Green Mile, oddly enough, also a story by King.

Darabont nails the tone of a 1940s prison movie from the very beginning. He makes sure the colour is drawn out of the picture, leaving us with a penitentiary almost devoid of life, and most certainly… hope. I love this stylistic choice, especially since it helps reinforce the day-to-day monotony of life within Shawshank Prison.

Speaking of the prison, I love how Darabont tends to portray it as a character in its own right. High, sweeping establishing shots early in the film paint the grounds as an inescapable, almost-medieval dungeon. From the beginning, we are told in no uncertain terms: No one gets in. No one gets out.

For a movie that spans almost twenty years, its pacing is also to be commended. Darabont makes sure we understand the passage of time, but instead of using somewhat-hackneyed on-screen dates, we’re allowed to see the years rolling by through the characters, as fresh-faced inmates slowly become wrinkled, grey-haired veterans.

The theme of brotherhood and friendship is one of my favourite parts of the film; thanks in no small part, to its leads; Tim Robbins as the unassuming banker and supposed-wife-killer, Andy Dufresne, and Morgan Freeman as Ellis ‘Red’ Redding, “The only guilty man in Shawshank.”

Both Robbins and Freeman are outstanding in this movie. Morgan, in particular. But make no mistake, Robbins holds his own. His Andy is delivered as a fully-fleshed character. I personally love how the opening scene (with a drunken Andy loading a gun) sets up an early nagging doubt as to his innocence. For a while, it makes us think he might actually be guilty. This tiny addition really helps establish the serious nature of Andy’s predicament later in the film. When his true innocence is revealed, it becomes all the more saddening, since every other character is guilty-as-charged.

Robbins is incredible as a man initially beat-down by prison life, over and over again. Sometimes figuratively. Sometimes literally. His early dealings with the notorious Bogs (Mark Rolston) and the ‘Sisters’ might be fairly-common prison movie fair, but it doesn’t mean it’s any less uncomfortable.

Like in the movie Taxi Driver, even the camera seems to understand the vile nature of Bogs’ attacks, as it pulls away to shield us from the horrors inflicted upon Andy.

However, like every great villain (especially in this film), Bogs receives a harsh-but-decidedly satisfying comeuppance, courtesy of one of Hollywood’s hardest prison guards, Captain Hadley (Clancy Brown).

All the while, Tim Robbins manages to portray several different versions of Andy during the film, moving from frightened newcomer, to confident member of the yard, to an almost-corporate-like offsider to the nefarious Warden Norton (Bob Gunton), while at the same time (unbeknownst to us), playing his own strategic game.

Don’t worry; I’ll get to that…

As great as Robbins is, this really is a master-class in acting by Morgan Freeman.

Red is probably his most-identifiable role, and for good reason. He’s simply majestic on-screen. His recurring parole hearings develop his character before our eyes. Especially the final one, which is still as captivating today as it was back in 1994.

A ‘man who can get things’, letting Red tell the story is a nice touch. Not only does Freeman have the perfect voice for such a role, but having Red as the narrator is so much better than the standard device of having Andy be the one to tell his own story. With Red doing the honours, it also helps give the film a literary connection, bringing us right back to the original story by King.

We see things from the outside, from Red’s perspective – which works outstandingly well since we aren’t privy to Andy’s internal thoughts. I find that this really helps leave the film’s later surprises as exactly that. Surprising.

Like many prison movies, the threat of being institutionalised is also prevalent in Shawshank, perhaps characterised best by Brooks (James Whitmore).

Portrayed as an elderly ‘long-termer’ from the get-go, Brooks is the film’s cautionary tale of the effects an enduring incarceration can have on a person. Brook’s story is as touching as it is tragic. His willingness to kill fellow inmate Heywood (William Sadler) just to stay in prison (rather than face the outside world), is at first, a completely-foreign concept from a movie filled with characters clamouring to be free.

But once again, Darabont gets it right when the movie actually focuses on Brooks for several minutes, allowing a sombre sidetrack that ends in tragedy.

Looking back, Brooks’ words, “The world went and got itself in a big damn hurry,” are possibly even truer today.

As heartbreaking as Brooks’ dive into depression becomes, Shawshank makes sure we understand its reasoning. The Brooks scenes of course set up a parallel with Red upon his later release.

Brooks dies without hope. But thanks to Andy, Red gains the hope to go on.

And that is truly the biggest theme of this entire film: Hope.

Throughout the entire movie, Andy is its tall-standing beacon. And while Red initially rejects the very concept, thankfully, thanks to his friendship with Andy, he is finally able embrace it.

Despite its heavy themes, Shawshank is not without its own brand of humour. Red’s quip, “Maybe it’s ‘cause I’m Irish,” Heywood finding the petrified manure and his Dumas / Dumb-ass mix-up, as well as Hadley’s own brand of vicious verbal putdowns, take the edge off here and there to make this a perfectly-balanced film.

We need this humour, because this movie has one of the greatest villains of all time. Warden Norton and his duplicitous nature has to be a stand-out whenever the subject of bad-guys we love-to-hate is brought up.

For a man with a God-complex (enforcing the Bible at every given turn), he turns out to be more of a devil than the prisoners he oversees. Especially when he complies in the murder of Tommy (Gil Bellows) to keep Andy’s innocence under wraps.

Gunton is so good in this film, that once Tommy is killed, for a moment, we think the warden may have finally broken Andy, especially after the heartbreaking, “Get busy living or get busy dying,” speech to Red.

But like all good Stephen King stories, the narrative is turned on its head in the very best way. Andy’s speech is later revealed to in fact be the inspiration he needs to finally free himself of Shawshank.

And here we are. The ending.

The final thirty minutes of The Shawshank Redemption are perhaps some of the greatest ever recorded on film. Red’s concern that Andy may be ready to commit suicide (driven home at this stage since we’ve already seen Brooks take his own life), Andy’s initial disappearance and the wonderful reveal of his secret tunnel, take an already-great film to another level.

Once again, Darabont uses the skills at his disposal to finally fill in the blanks. We get to see the pay-offs of the rock-hammer, the need for the Rita Hayworth (later, Raquel Welch) posters, and of course a brilliant call-back to the warden’s quote about the Bible, “Leading to salvation…”

These minutes also lead to one of the most iconic shots in Hollywood history. A shot known the world-over, instantly recognisable and just as powerful as a symbol of hope in the face of oppression.

Like Bogs, the warden (and to a lesser extent, Hadley) receives his much-earned just-deserts. Although, where many films of this kind would end shortly after Andy’s escape, Shawshank makes sure we finish things off right.

Just as it does earlier with Brooks, the film switches focus again, this time to Red and his struggles on the outside. Once again, the themes of brotherhood and hope overpower those of being institutionalised, as Red’s journey finally leads him to reunite with Andy in another well-loved movie moment.

Like the inmates of its namesake, The Shawshank Redemption certainly has stood the test of time. Despite being a box-office ‘bomb’ upon its release, it certainly found its audience on home video and the aforementioned cable television networks, becoming one of the world’s all-time favourite films.

I hope anyone that hasn’t yet seen this masterpiece does so as soon as possible, and I hope they enjoy it as much as I continue to.

Place your bets! But first, make sure you grab an Unfunny Nerd Tangent shirt! Andy would’ve had no reason to escape if he’d had a Mon Milfma shirt!