It’s Christmas, the time of miracles. So how could #8 be anything other than everyone’s favourite ‘Christmas’ movie?

Probably the greatest film of its genre, it also gave movie-going audiences two bona fide Hollywood megastars and changed the game for decades to come.

So sit back, make fists with your toes, and reminisce. 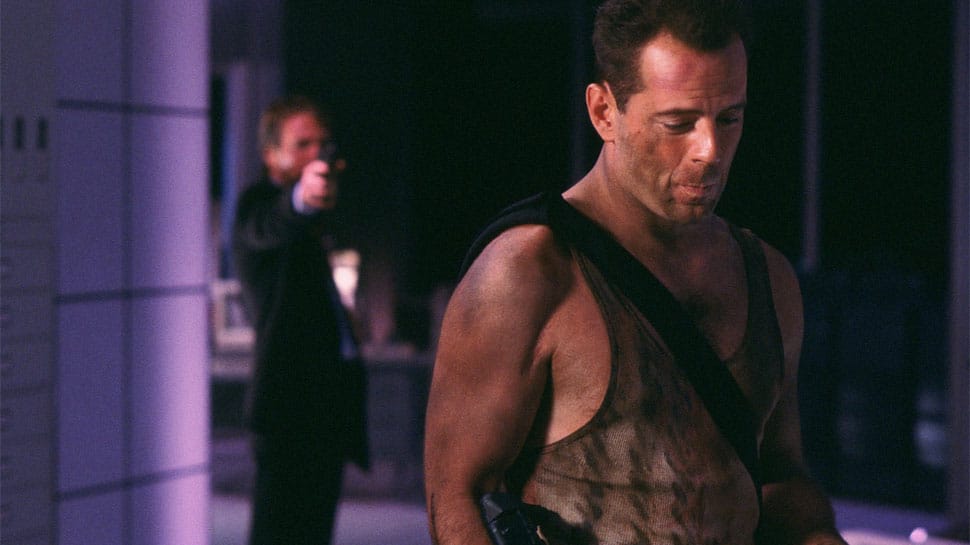 Definitive is a word often used to described certain films.

Jaws, Star Wars, The Dark Knight, The Godfather, Ben Hur and Saving Private Ryan, all of these have at one stage in history been labelled the definitive movie of their genre.

They signify a turning point in their respective categories, movies that audiences point to as stand-outs in quality and/or game-changers that forever altered the way their genres were approached by the filmmakers that followed.

For me, Die Hard is the definitive action film. It altered the way action movies were perceived, it reinforced the premise of one man versus a horde of villains, added the notion of being trapped in a contained location and allowed audiences a new perception of an actor previously pigeon-holed as nothing more than a comedic ‘TV star’.

We all know the story; in Los Angeles on Christmas Eve, a group of terrorists seize control of the esteemed Nakatomi Plaza, while one man alone attempts to rescue the hostages and save the day.

That man is NYPD Detective, John McClane (Bruce Willis), a character that has become the benchmark for action-heroes ever since.

In 1988, Willis was mostly known from the television series, Moonlighting, which focused on his more-comedic talents. But Predator director, John McTiernan’s gamble to cast Willis certainly paid off. Looking back, it’s hard to imagine anyone but him as John McClane. Willis brings his A-game in a performance that turned out to be as iconic as it was career-defining.

Besides his charm and likability, I believe part of McClane’s appeal is his humanity. He’s portrayed as an Everyman right from the beginning when he rides up front in the limousine, driven by fan-favourite, Argyle (De’voreaux White). Willis excels at presenting McClane as a working-class hero who strives to fight for what he knows is right, but is littered with flaws that prevent him from being a flat, two-dimensional character.

I love that McClane is shown to be an outsider in almost every aspect of the film. He’s alienated from his family. He’s an out-of-towner; a New York guy in the midst of the Californian life-style. As a cop, he doesn’t fit with the corporate Nakatomi scene. He’s also (initially) out of his depth when faced with battling several military-trained mercenaries.

McClane’s stubbornness is just one of his many flaws. It’s what seems to have affected his marriage to his estranged wife, Holly (Bonnie Bedelia), but it’s also what keeps him alive and prevents him from giving up, despite the overwhelming odds.

And of course, since every action hero needs a catch phrase, it’s only fitting that McClane’s has become as immortal as he is; often imitated but rarely equaled.

As well as Willis as McClane, McTiernan’s direction is another element that makes Die Hard so good. No time is wasted, since many shots allow the audience to understand exactly what’s happening without the need for wordy or clunky exposition.

The script pays off multiple early setups, most notably McClane’s anti-stress technique of ‘making fists with his toes’. Having McClane barefoot in the movie is a clever way to keep him vulnerable (even before the terrorists subject him to shards of broken glass), by keeping McClane ‘on his toes’, both physically and metaphorically for most of the film.

McTiernan also manages to maintain the tension throughout the entire movie. Almost every scene is fraught with danger. Fighting terrorists on the roof, crawling and falling through air-conditioning ducts, the unexpected ferocity of McClane’s makeshift C4 detonation, plus the numerous gunfights and fisticuffs from which he barely escapes with his life.

Yes, the movie is filled with great stand-alone action scenes, but unlike many Die Hard wannabes, this movie’s action actually helps further the story and leads to now-iconic movie moments.

For example, the early fight with terrorist, Tony (Andreas Wisniewski) is not only terrific action-wise, but Tony’s cigarettes, watch and various armaments give McClane the intel he needs to continue combating the remaining terrorists. The same scene then leads to the ‘Now I Have A Machine Gun, Ho-Ho-Ho’ reveal.

Plus it affects Tony’s brother, Karl (Alexander Gudinov), who becomes the movie’s most dangerous physical threat. His need for revenge makes things personal between him and McClane and provides their fight scenes with an extra layer of tension.

The fight in the boardroom is another unique instance, as McClane is forced to kill his enemy from beneath a series of conference tables. He ‘turns the tables’, if you will. But that scene furthers the story as well, since hurling the dead terrorist out the window alerts lone street cop, Al Powell (Reginald VelJohnson) of the developing situation, and we get another classic line from Willis.

The fight versus the aforementioned Karl is a perfect knock-down-drag-out affair. McClane’s desperation is equaled only by his anger and frustration – evident in the final moments of the scuffle where McClane moves past trying to defeat a terrorist and specifically states his intent to murder Karl. It’s a nice little ‘shades of grey’ moment that reveals McClane isn’t a stereotypical, white-wearing hero – despite his love of Roy Rogers.

I love how the eighties theme of overly-controlling federal agents and incompetent people in positions of authority is alive and well in Die Hard. Deputy Chief, Dwayne T. Robinson (Paul Gleason) is great in another love-to-hate him role and who can forget Johnson and Johnson (Robert Davi and Grand L. Bush), the pair of arrogant and ill-prepared FBI agents?

The supporting characters of Die Hard also help it stand head-and-shoulders above most other formulaic action movies. Holly soon becomes the leader of the hostages. Her hidden identity as McClane’s wife is a great tension builder throughout the movie, especially once the truth is revealed.

Like the earlier barefoot setup, Holly’s watch is another nicely-written concept. The watch seems to symbolise the materialistic draw of Nakatomi, the barrier keeping John from Holly, since by the end of the movie, releasing and discarding that same watch is what frees Holly and reunites her with John.

Corporate slimeball, Ellis (Hart Bochner) and nosy reporter, Thornburg (William Atherton), both separately add a secondary set of obstacles for McClane to overcome as they interfere with his attempts to save the day.

Ironically, while the Ellis character is played for laughs and Thornburg seems the more sinister of the pair, Thornburg’s comeuppance is more comedic in nature, while Ellis is resigned to a more gruesome fate.

Sgt. Powell’s story is a nice little side track. His tragic backstory adds heart to the film. He also acts as a would-be angel on McClane’s shoulder during his lowest moments and finally he becomes a literal guardian angel when he saves John and Holly from Karl’s last minute surge.

And most of all, like many of the films on this list of mine, Die Hard (like Terminator 2, The Green Mile, One Flew Over the Cuckoo’s Nest and The Empire Strikes Back) gives us a villain for the ages in Hans Gruber, played to perfection by the magnificent Alan Rickman.

As Gruber, Rickman easily steals the show. He’s cold and calculating, yet intelligent, refined and civilised. Despite the evil things he does, Gruber is also charming and somewhat funny (but not over the top like Rickman’s later turn as the Sheriff of Nottingham in Robin Hood: Prince of Thieves). He’s so just good at being bad.

Gruber’s plan to disguise a daring heist as a political terrorist statement is also a clever spin on the standard action movie villain motivation. The need to break the Nakatomi locks to get to the vault also gives the movie a great ticking-clock motif that prevents McClane from simply waiting things out.

With both Willis and Rickman at the top of their respective games, Die Hard delivers a wonderful, slow-burn rivalry between McClane and Gruber. Their mutual antagonism begins as a verbal battle of wits, leads to the up-front confrontation in which McClane sees through Gruber’s ‘Bill Clay’ ruse, then ends in a physical stand-off that culminates in the seminal scene of Gruber falling from the tower.

Now, obviously I love Die Hard. But I know what you’re thinking – Is it a Christmas movie? Well, in my mind, it is, just not your traditional Christmas movie. I mean, it’s not a hill I would die on (or Die Hard on), but the film contains various ingredients that make me lean towards the Yes argument.

But whether you believe Die Hard to be a Christmas movie or not, it doesn’t really matter. What does matter is the brilliance of this film and the legacy it has left behind. Ever since 1988, almost every one-man action film has been described at some point as Die Hard on a… or Die Hard in a … etcetera, etcetera. Even its own sequels follow this premise.

In closing, Die Hard has simply become synonymous with action adventure blockbusters. It delivered Alan Rickman to the world, made a bankable megastar out of Bruce Willis, and left audiences with a slew of memorable movie moments. It’s also a film I will forever love, no matter how old I get, and will re-watch over and over again multiple times a year.

Whether it’s Christmastime or not…

For more Die Hard greatness, listen to us solve the Christmas movie debate on Episode 8 of our podcast…

If a certain someone won’t tell you where your detonators are, sweeten the deal by getting them an Unfunny Nerd Tangent shirt! After all, Mon Milfma makes the perfect stocking stuffer… for this or any other Christmas!